So... Gods and trolls and giants and sea beasts and mages, huh? You know, mages. Like this dude: 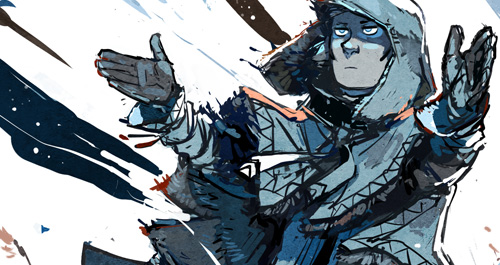 Heh. Those of you who follow me on twitter already might have seen the sketch for that and know that he's another secondary character, one that I haven't shown before. He's the older brother of one of the main characters and pretty important, more so even than the silly quartet of secondary character's we just met. He won't be physically joining the team on this journey, but he'll be keeping in touch. I mean, he's a mage, he'll figure out some way to show up. (I'll post that full picture once the new chapter starts and the first characters are formally introduced.)

Oh! And two of the main characters are mages too! One of them knows it, one doesn't and will find out later. And those two mages won't be from the same country, nope. Wanna guess which two it'll be?

One last thing about this page: I totally modelled it after a book called "Historia om de Nordiska folken" aka "The history of the Nordic peoples" (but the official translation is "A Description of the Northern Peoples".) It's written by a Swedish priest living in Rome sometime in the beginning of the 1500's about the Nordic countries. Each chapter always starts in the fashion of "Chapter XXVII About the terrifying monsters living in Norwegian waters" and then there's a few paragraphs about the monsters and a cool medieval wood block illustration at the top. Probably my favourite book that I own right now.( it's way over 1000 pages long so ooof!)