It's sure been a while since the last blog update, huh? I...guess I've just been busy? But yesterday I changed the whole main site layout, which I've meant to do for ages, so might as well squeeze in a new entry here. Btw, I still liked the old main site layout, but it's just been the same for well over a year, ever since the comic first started, and sometimes you just have to shake things up a little. It was time for something lighter. Oh, and here's what the old layout looked like in case someone already forgot(of course it's also viewable through the internet wayback machine): 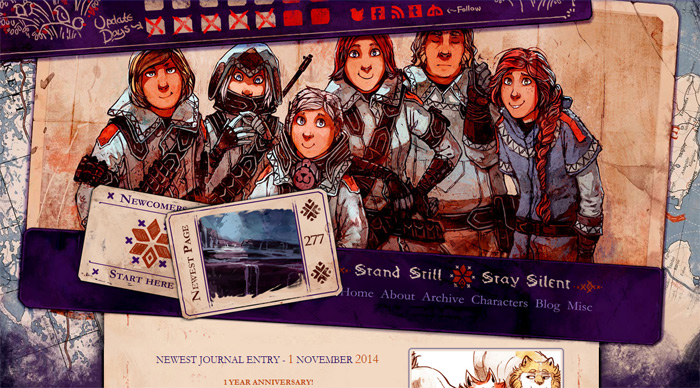 The second thing today, a quick update on how the book prep is going: it's going well! All the heavy fixing and bonus content making is behind me, the only thing I need to do is write the afterword and some short image texts for the back of the book before I can send the whole interior to be proof read. Gosh darn was there a lot to fix with the page originals though, so many little missing or incorrectly formatted things. I don't understand why I've saved so many pages without speech bubbles. Why would I do that? I've obviously done the speech bubbles on every page, but then I've just constantly decided to not save the original file after that? Artist mysteries. o_o

Also I'll post the back-of-book tutorial here as a blog post soon-ish (since it wasn't supposed to be book exclusive like the bonus comic pages), but for today here's this other thing: a few people requested a translation of Lalli's moon spell to be included somewhere, and I think that's a great idea so this is going to be in the back of the book too. 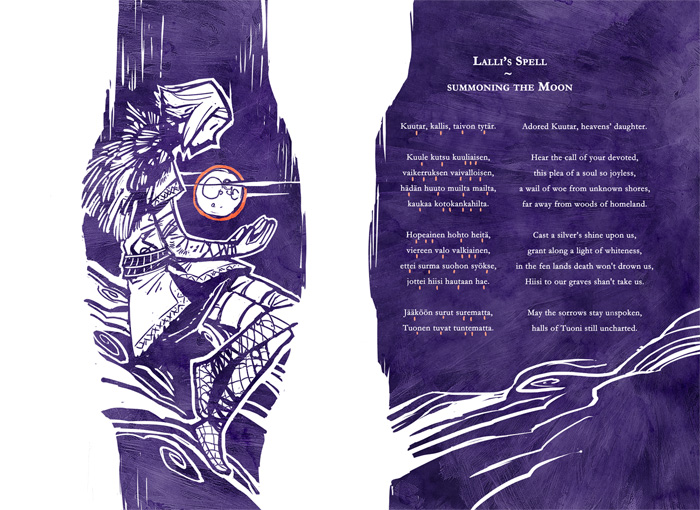 The little dots mark the division of syllables on the Finnish side (which is a very integral part of the runo-poem structure), I figured some people might enjoy that. Aaaand there's a version of it on the updated about page, over here because why not. I guess I'll eventually collect all of Lalli's spells this way as they come up in the comic.

That's it for today! I might post the comic walkthrough this week even so maybe we'll see each other here before the new chapter starts on Tuesday. Oh, and a little parting tip for anyone planning on making a print comic in their life: don't leave little errors and unfinished things hanging around in your page originals and go "oh, well, it's such a tiny fix, future me can take care of that when it's time to put the book together", because future you will end up with 300 pages of tiny little fixes and will really want to murder past you. Just so you know!